A revised and updated version of this article can be found here:

The Chinese term "Gong Fu Cha" refers to the traditional method of brewing Oolong tea that requires knowledge and skill. In addition to a small Gong Fu teapot, pitcher and cups, a bowl or vessel that is big enough to hold the brewed tea leaves as well as the discarded rinse water before and after brewing, are all necessary.

Begin by rinsing and warming the teaware with boiled water, and discarding the rinse water.

Prior to brewing the first pot of tea, rinse and moisten the leaves by filling the pot with boiled water and immediately pouring off the rinse to be discarded. Then refill the pot for the first brew. About 50 seconds is allowed for the first brew, and 10-15 seconds are added for each successive brew. After the third brew, up to two minutes for each successive brew is fine. Quality tea can be brewed 6-10 times, depending on the leaf. 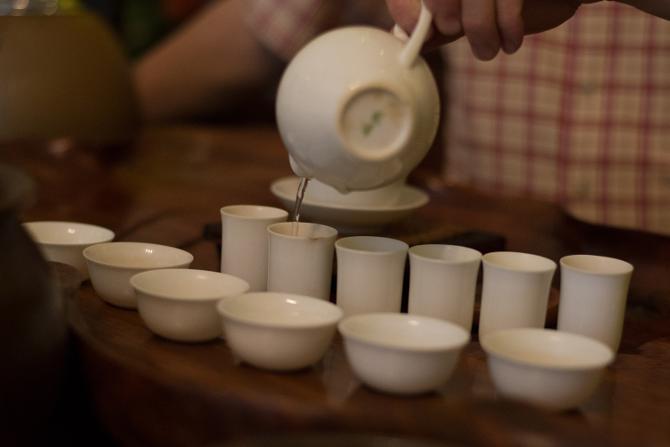